Posted by StCroixValleyGifted on Nov 11, 2015 in Announcements, Featured Resource, Members Only

NAGC releases State of the States in Gifted Education 2014-2015 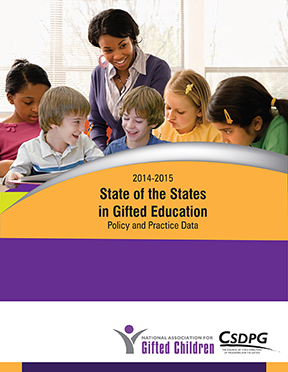 The National Association for Gifted Children (NAGC) has issued its 2014-2015 State of the States in Gifted Education biennial report. Look for Minnesota standings to be updated from 2012-2013 and compare to national programming standards for PreK-12 education.

NAGC leaders shared these remarks in reaction to the latest report:

“A lack of measurement, oversight, and transparency means that children with gifts and talents will remain hidden in the shadows of our schools,” said M. RENÉ ISLAS, Executive Director of the National Association for Gifted Children (NAGC). “Without national leadership and consistent policy, haphazard and inequitable treatment of the gifted will persist.”

“We need to change this reality by requiring states and districts to report on the key indicators of our high-achieving students, just as we have long required similar reporting for those students on the lower end of the achievement spectrum,” said GEORGE BETTS, President of the NAGC Board. – Media Release

From the report, which is available online in summary and full formats:

The data collected for and represented in this report reflect the policies, practices, and their resulting effects for the estimated three million academically gifted and talented U. S. students in grades PreK-12. Forty-two states including the District of Columbia (referred to collectively as “states”) responded to the 2014-2015 State of the States in Gifted Education survey. …  As observed in past analyses, several key themes emerged from high rates of state responses to items regarding decentralized decision-making and accountability, limited service options, the importance of professional development, the influence of federal education law, and funding issues.

NAGC Call to Action from the State of the Nation highlighting key report findings: 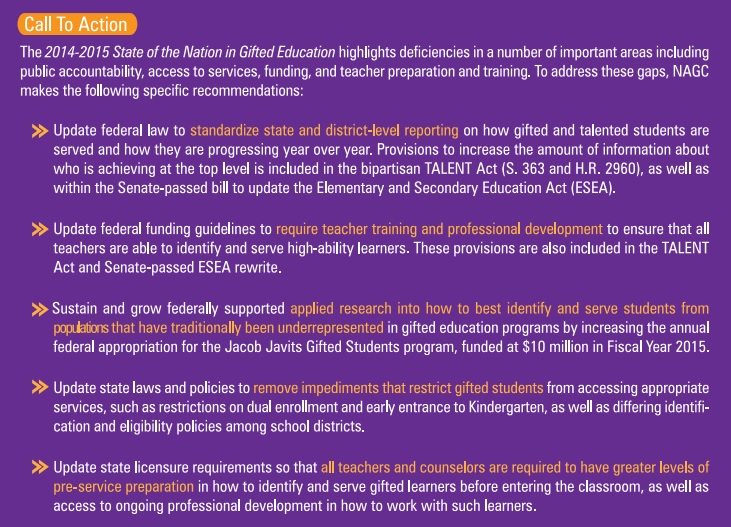 NAGC issues a Call to Action in response to its 2014-2015 State of the States in Gifted Education report.

From the Global #gtchat Twitter discussion with NAGC leadership about the release of this report:

A2) The report helps advocates demonstrate where edu systems are missing the mark #gtchat https://t.co/p4bxZXFpqy pic.twitter.com/wip7HhuYaH

Missing out on Chapter News?

Thank you for subscribing! Please adjust your email settings to accept messages from stcroixvalley@mcgt.net so future newsletters reach your inbox.